Are These Two “Bull” Designs Confusingly Similar For Auto Parts?

Here’s another Section 2(d) opposition involving dueling design marks, this time for overlapping and related auto parts and services. Applicant K2 refers to its mark (on the left) as “an abstract partial body view of a cattle like creature.” Opposer Streetcar refers to its mark (on the right) as a “fanciful design of a bison.” Confusable? You be the judge. StreetCar ORV, LLC d/b/a American Expedition Vehicles v. K2 Motor Corp., Opposition No. 91248742 (May 3, 2021) [not precedential] (Opinion by Judge David K. Heasley).

Since the parties goods are in part identical, a lesser degree of similarity between the marks is necessary to support a finding of likely confusion. The Board observed that side-by-side comparison is not the proper approach for comparing the marks. Nonetheless, “the relevant consumers-motorists seeking customized structural modifications for their vehicles-are likely to perceive the parties’ marks as more similar than dissimilar.”

The bovine subfamily includes cattle and bison. Both designs depict bulls. Both bulls appear in a three-quarter perspective, their feet planted, their heads lowered beneath prominent humps, as if threatening to charge. Although one faces left and one faces right, that distinction would be little noted nor long remembered-as demonstrated by analogous cases[.] 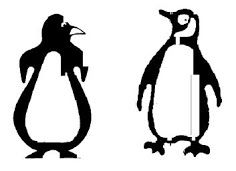 The Board found that consumers “could easily perceive Applicant’s design mark as a stylistically modified version of Opposer’s design mark.”

The Board also found that Opposer Streetcar’s marks are “somewhat commercially strong.” Applicant K2 submitted dozens of third-party registrations for marks that included a bull or a bison figure, but withouy evidence regarding the extent of use of the marks they were entitled to little evidentiary weight. Furthermore, many of the marks were not that similar to Streetcars mark, and the identified goods were as close to Streetcar’s goods as are Applicant K2’s.

The Board noted that “the frequent, common adoption of bull or bison designs by third parties, as evinced by their registrations, serves to show that the designs are suggestive of the rugged, strong, characteristics or qualities of auto parts.” However, “suggestive registered marks are entitled to protection against registration of confusingly similar marks-especially marks used on identical or legally identical goods.”

Considering all the relevant DuPont factors, the Board found confusion likely and it sustained the opposition.